What do you think makes for good enemy placement?

There’s a lot of factors that go into this. In abstract, it’s about placing the enemies in spots where it is tough for the player to deal with them, but where the player has a variety of options for dealing with them, without allowing the player an easy way out.

This means also building the level around what the enemy can do. If the enemy is good at pushing, put them next to a cliff. If they toss projectiles that drop down, put them up high. If they require the player to jump, put down something dangerous to land on. END_OF_DOCUMENT_TOKEN_TO_BE_REPLACED

What do you think constitues good map design in a multiplayer Fps game? I hear the term “this is a good map” but very few people go in depth as to what that actually means.

That’s not totally my forte, but I’ll give it a shot.

Here’s a picture from Robert Yang, which I think is a good depiction of FPS level design in a nutshell.

Apart from that, a big concept in FPS level design is “Loops”. In FPS, your position determines your line of sight to other people. Line of sight is a connection to other people, a capability to attack them. In this way, use of cover is like blocking or dodging in a fighting game, so the ability to block or dodge enemy shots is dependent on level design. In a hallway, you don’t have many options for approaching an opponent, there’s only one line of sight. To make a level where both people can choose to move around one another and position effectively versus one another, you need to introduce loops.

Take a look at de_dust2, the best known FPS map of all time. Draw a line along all the central paths through the level. There’s a number of loops created. Only one path crosses over another path on the Z-axis, and it tastefully adds another way to access 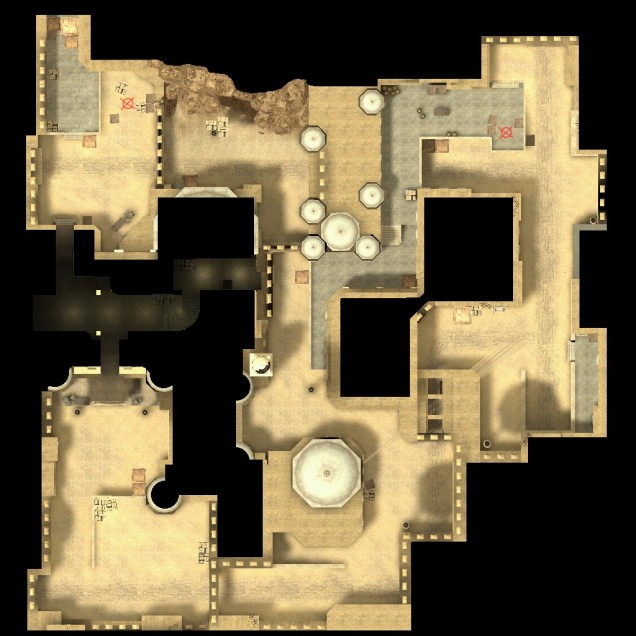 Now compare that to de_dust. This has loops too, but they’re much smaller, and more detached from one another, the middle area of the map is more like a chokepoint, while dust2 doesn’t have any absolute chokepoints. 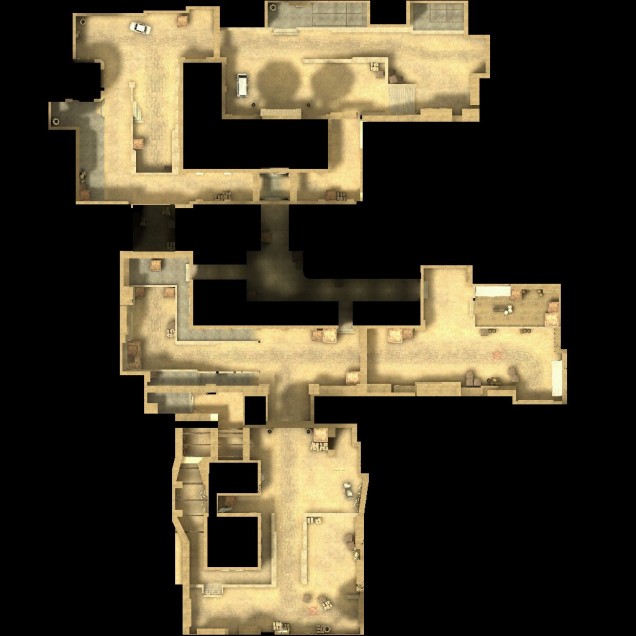 Good maps are very conscious of how they control line of sight, and how they allow players to move through the level, as well as where they offer cover. Given how important positioning is in FPS games, it’s important to give the player many different possible paths they can take through the level. A trend to notice with popular Counter Strike maps is, they’re usually 3 big circular loops overlaid on each other, with a few smaller loops inbetween.

Stealth games rely on this principle of loops too, you can’t have stealth in a single hallway.

And on the opposite extreme, if you offer too many paths, then you end up with maps that the Quake community call, “Guess maps” where someone could pop up from any angle and there’s too many options to reasonably predict any particular one. This is why the 3 circles pattern tends to work pretty well in CS.

Other effective paradigms and tricks are out there too, such as in classic maps like Halo’s Blood Gulch, which has a curving hilly landscape to obscure far-off combatants, and high-up side-paths that people can try to sneak along. This blog post has further elaboration and its own ideas for how to design FPS maps.

When you encounter a good map, think about how games tend to play out on it, and whether the layout of the map contributes to fun sessions or not.

Join my discord to discuss this and other game design related topics:

What do you think of the level design in action game arenas? Specifically how most fights that occur in games like DMC/Bayo are pretty barren. I get that fights should be engaging regardless of the level but I don’t see why arenas like this aren’t more common.

I mean, those games just don’t work with level design very well. Have you played the platforming sections in DMC3 and 4? They’re pretty awful. Platforming in Bayo and MGR is pretty bad too. All these games have character motion that makes characters very difficult to line up on a specific spot in comparison to platformer games like mario. All these games have jumpsquat animations and jumps that lock you in specific directions and don’t give you much air control, if any. This works really well in combat, it means you need to commit and choose options relative to your opponents, and you barely notice it there because all your actions are deliberate and straightforward, but for navigating geometry, it’s hell. Have you tried playing a fighting game which didn’t design its jumps this way? Like Super Smash Flash 1, which used more conventional jumping controls? In Super Smash Flash 1, unlike real smash bros games, when you press jump, you jump instantly, and you can switch your facing direction at any time during your jump. END_OF_DOCUMENT_TOKEN_TO_BE_REPLACED