I heard Ys is a good franchise but I don’t know shit it. I don’t know where to start and which ones are the best. Some look really dated too. Can you tell me what the franchise is, why it’s fun, and which games are worth playing?

I barely know shit about it, apart from playing Oath in Felghana and Origins. Both of those are great. The ones I’d recommend are those two, Ark of Napishtim (haven’t played, but same engine), and Ys I & II Chronicles+. 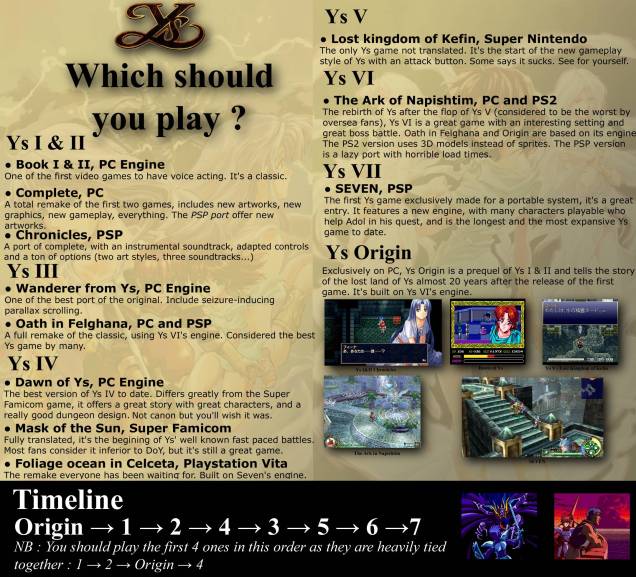 Ys 1 & 2 feature the bump system, which I honestly have not figure out how the fuck it works yet. I walked into the first enemy I saw on nightmare difficulty and almost immediately died. Took literally less than a second. I’m reserving judgment until I figure it out.

Ys Oath in Felghana and Origins are basically like 2d Zelda in 3d. They have a light RPG system where you grind up to or close to a “recommended level” for the boss. This level is not stated anywhere, you can sort of tell when it is by the monsters refusing to drop exp anymore. So grind time is relatively short compared to other RPGs. Upgrading weapons or armor is pointless, wait for new ones to drop unless you’re on the most powerful set.

Basically, enemies are easy to run past, can be hard if you actually try to fight them. A lot have projectiles, a lot have interesting movement patterns, a lot have good attacks. You can jump, and later in the game, double jump. There’s some light platforming. You can use spells to shoot projectiles and platform better.

Bosses can range from being like better 2d zelda bosses to practically being touhou bosses. They change their patterns based on the difficulty level, so you should play on nightmare if you can stand the grinding (or use cheat engine to skip it when it gets tedious, after checking what the recommended level is from a guide or video, I finally did this for the final boss of Origin, the data type of exp is a float).

Basically, they force you to move a lot. They force you to use the right magic spells per boss, and not for a type weakness reason. They force you to look out for opportunities to attack and to maximize the damage you get out of them. You gotta weave around attacks and watch for tells of enemy attacks. It has a lot of microspacing and the ability to jump acts sort of like a limited dodge in many encounters, but enemies have anti-air options frequently too.

I suggest starting with Oath or Origin personally. I think Origin is the better of the two, but other people disagree with me.