In the 00’s, developers forgot how to make singleplayer shooters with deep combat anymore. For the sake of realism most weapons were made hitscan to resemble how guns work IRL. Enemy variety suffered, since hitscan tracers don’t have as many mutable properties as projectiles do. Weapon variety suffered, since identical enemies don’t warrant a varied weapon arsenal as much. Finally level design suffered, because there isn’t a whole lot you can do with identical weapons and enemies.

So what do you do if the core gameplay lacks variety? The common approach taken by most developers was switching to another style of gameplay to avoid wearing out the core shooting. Instead of running, you’re now driving a tank. Instead of gunning, you’re now forced to be stealthy. Instead of depth, you’re shooting for breadth. Shooters became theme park rides where every half hour they introduced a new mechanic or mode of gameplay and then threw it away for good. Remember all the vehicle sections? The turret sections? The sniper sections, forced stealth sections and escort missions? They weren’t mechanically deep, but they were at least something different.

Soldier of Fortune, No One Lives Forever, the Medal of Honor games, the Call of Duty games, TimeSplitters, Black, Return to Castle Wolfenstein, XIII, the new Wolfenstein games, the Gears of War games, the Killzone games, the Resistance games, even exceptions with standout combat like the Halo games and Vanquish all fell prey to this need to completely change the mode of gameplay for the sake of variety. That’s what happens when you don’t believe your core gameplay can carry the game — when you don’t know how to iterate on hitscan combat. 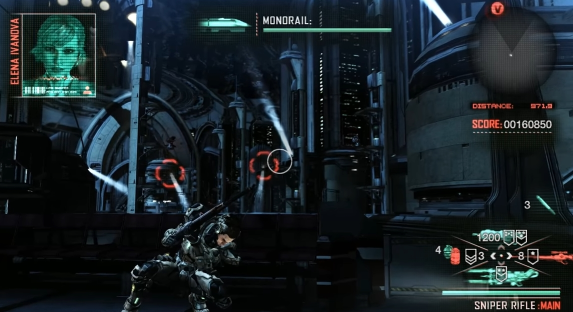 And then there’s FEAR. On the surface it’s identical to other shooters at the time, save for a slo-mo power and a three-weapon limit instead of the usual two. Here you’ll be fighting the same grunts over and over using a shotgun and some assault rifle variant. Yet despite this generic premise, FEAR managed to stand out in an oversaturated market. Not because of gimmicks or unique mechanics, but somehow good hitscan combat and “good” AI. So what did FEAR do right?

First, FEAR’s combat arenas are circular — meaning each path you can take is surrounded by one or two covered flanking routes. These allow you to circle around the main path and get the drop on enemies, which beats taking guaranteed hitscan damage in a direct firefight. Without these you’re left with a hallway (similar to the left layout in the above diagram) that only allows you to move back and forth, where all you can do is sit in place and play peekaboo; only moving up when most of the enemies are dead. Circular map design (like the right layout in the above diagram) then discourages simple and repetitive strategies like these by giving you the opportunity to move around enemies.

Second, the Replica AI can also make use of these flanking routes. Since no position is safe, both you and the Replicas are always trying to outmaneuver each other for a better angle. This new dynamic gives level designers more options to play around with: arena layout, height variation, player/enemy points of entry, cover density, and other opportunities for creating varied encounters can be used without resorting to gimmicks. More importantly, the levels provide the AI with options too. Without them the Replicas would be stuck playing peekaboo, just like you. “Good” AI is pointless if it has no meaningful options to use.

Third, FEAR grants you the initiative. Before the fight begins, the Replicas will spread out across the arena, unaware of you. This allows you to scan the arena layout, set up traps, and choose how to start the fight. This not only gives you more engagement options, but gives you more courage to start in the middle of the action.

Compare this to entering a new room only to find several Replicas inside already firing at you. Here your only options are to rush in for a better position, or retreat behind the doorway and take potshots. The former will kill you; the latter is boring, because it leaves you with no other viable movement options. There the Replicas can only flush you out with grenades, or waltz into your choke point one-by-one. Even if the room ahead is a well-designed circular arena, it’s wasted if you’re already pushed out of it when the fight begins.

But there’s another aspect to FEAR that sets it apart, and that’s information warfare. Here you have to deal with a fog of war. Enemies are spread out in such a way where you can’t see them all at once, and you’re rarely given a full overview of an arena. So without perfect information, you have to improvise through prediction and info gathering.

One such layer of information is sound, like how the sound of footsteps can give one’s position away. The Replicas are very vocal not just to appear smart, but also to give you more information. This way you can hear what their status is, or what they’re about to do next. Other sources of information may include lighting. Shadows reveal enemies around corners, and Replicas get alerted to your flashlight. And by knowing that Replicas prefer to flank, you can predict the path they’re more likely to take.

Compared to shooters with a similar focus on positioning like Quake 3 or Rainbow Six: Siege, FEAR’s info warfare is very basic. The former pit do pit you against actual human opponents, after all. But FEAR proves there’s untapped potential for singleplayer hitscan shooters where the AI can outmaneuver you. FEAR only doesn’t take the idea that far. To that end, there could be secondary objectives. Vying for resources or having to capture/defend a target would expand the mindgames; force both parties to consider more than killing each other. Diverse enemy behaviours (sneaky, distant, aggressive) could expand what you can predict/exploit. More movement options (destructible surfaces, teleporting, grappling hooks) could expand how you approach each other. Tools such as radars and drones could expand how to gather information. Both parties could spread misinformation using holograms, cloaking devices, traps, and smoke grenades. Most of the Siege operators would make for interesting enemy types, actually.

The flanking game is what makes FEAR great, but the slo-mo power and being able to carry up to 10 instant-heal medkits conflicts with that. Both allow you to tank damage that would have killed you otherwise. And because slo-mo energy refills fast and medkits are handed out like candy, you have a lot of resources to tank through enemy fire; playing down the flanking game in favor of a shallower yet more effective playstyle.

Mechanics that mitigate damage (regenerating health/shields, portable medkits, slo-mo) do allow more aggressive playstyles in the face of hitscan. But these tend to have the opposite effect of encouraging thoughtless brute-force playstyles. Why think about movement if I can tank most damage anyways? To compensate, games could offer you tools to gain the positional advantage. In Crysis and Vanquish you can spend your energy for a positional advantage (Maximum Cloak/Speed, knee thrusters) or an offensive advantage (Maximum Power/Armor, slo-mo). So could FEAR’s slo-mo energy also be used for a speed boost.

FEAR managed to remain engaging despite its limited enemy/weapon variety and it being all hitscan by adopting a new design paradigm. One where positioning and constant movement are emphasized rather than tanking damage or trench warfare, proving that interesting combat can be had with only hitscan. Sadly, no singleplayer game tried to follow in FEAR’s footsteps since, despite the massive unexplored potential of this new paradigm that Rainbow Six: Siege also hints at.

One thought on “Why FEAR 1 Is The Most Important Hitscan Shooter – ft. Durandal”