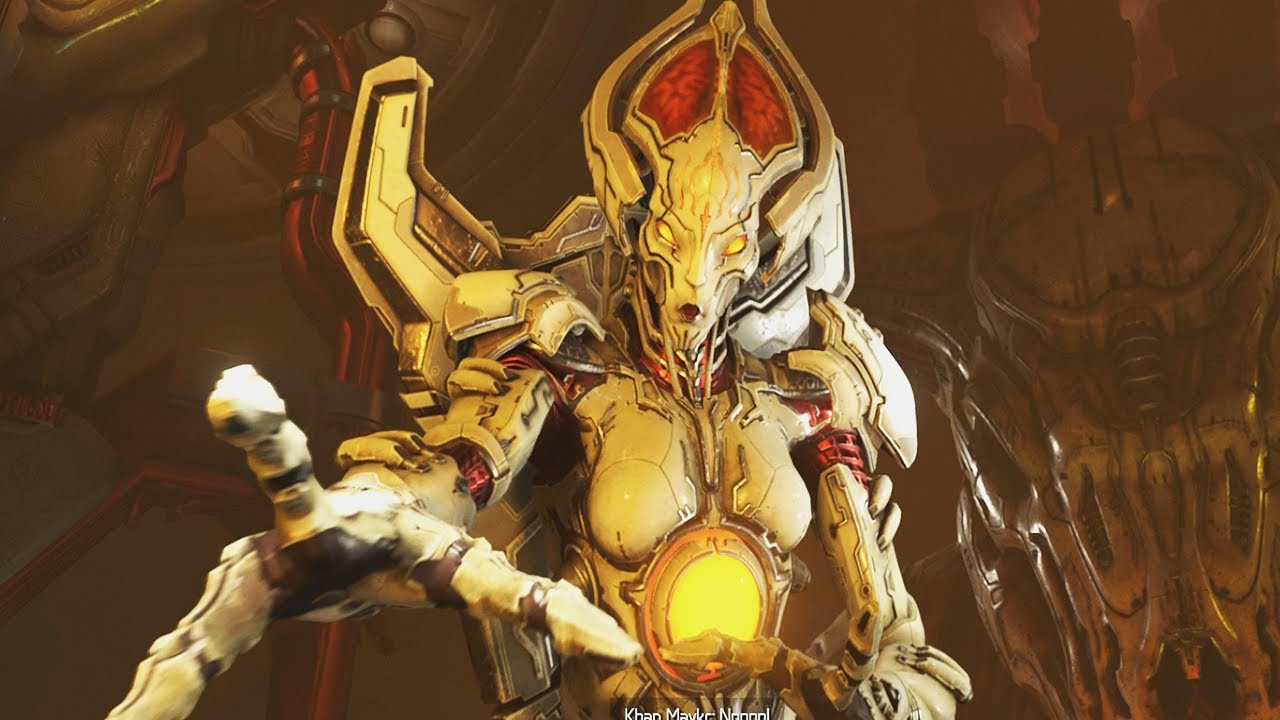 There have been some complaints about the story of Doom Eternal in comparison to Doom 2016, and I’ve gotta say, I agree. Doom Eternal’s story is disappointing, largely because it doesn’t build on the premise of 2016 and introduces a bunch of characters that we don’t get any time to become attached to as villains. That said, this has absolutely no bearing on Doom Eternal’s quality as a game. It’s a vastly better game than its predecessor, and is one of the best FPS games ever released, very possibly the most tightly tuned FPS game ever released, in a way reminiscent of fighting games, in a way stylish action games should be envious of.

I know I have a bit of a reputation for being “fuck story”, but it’s not that I don’t enjoy stories or enjoy analysis of them. I’m willing to put up with an actively bad and obtrusive story in the name of a good game and likewise I can appreciate good stories from bad games (Legacy of Kain Soul Reaver is my go-to example for this). I don’t want to build a platform where I’m expected to have a nonsense hardline position where it doesn’t make sense.

Some people have been complaining about the story of Doom Eternal, and I think their complaints have merits. Anyone saying the lame story makes the game bad can shove it.

I enjoyed Doom 2016’s dismissal of story elements by the main character. I thought the core concept of 2016 was good, corporation leverages hell to power energy crisis earth, devolving into intracompany demon cults going rogue and fucking everything up. Hayden is like, “but energy tho” and Doomguy does not give a single fuck. We have a neat sequel hook of Hayden betraying us at the end, and Eternal just does absolutely nothing with that.

Eternal throws practically this whole premise out the fucking window. We have new villains who appear without introduction. Doomguy suddenly has this history that has all this ominous foreshadowing, and we still have the UAC hologram lady, despite the cult that spawned her not existing anymore and her presence not really making any sense where she shows up. The new plot elements that appear are incredibly generic and given an unnecessary level of detail. It feels like they’re leaning into trying to make a “whole” experience over focusing on the character of the experience. Instead of explicitly not giving a fuck, Doomguy now just sorta stands there and waits patiently for people to rant at him before doing the thing they’re whining at him to not do.

Leaning into camp and fan favorite lore is cool, I would have appreciated more of it. I appreciate the canonization of campy elements like rip and tear, “Doomguy”, and huge guts (though they must have repeated rip and tear like 3 times, which is too many, considering they already said it once last game). I wish they were more varied in this, and had a new angle besides “Mortally Challenged” UAC hologram lady, who really shouldn’t have survived the destruction of the UAC with Mars. Doomguy strolling into the BFG base was campy and indulgent, but honestly I loved it. I wish they skipped the long elevator ride afterwards (it’s probably to mask a load time, but still).

There are too many mini unskippable cutscenes. Barely below the threshold for being annoying. The cutscenes that are skippable are too long. I feel somewhat obligated to watch these things on a first playthrough and they kinda just tried my patience. Doom didn’t need longer cutscenes.

The new villains are introduced in media res, given no characterization, and have barely any personality. They don’t add to a larger point. They’re sniveling and lack charisma, even as pure evil villains, like, “C’mon doom slayer, just let us sacrifice the humans! Please! I’m begging you.” Their threats sound limp and pathetic as they keep demanding their followers take care of Doomguy and failing, making the narrative about these losers who can’t get anything right.

The storyline is something that would be generic in any other context. The “big reveal” that hell tortures dead people to produce energy and they reform into endless demons isn’t really a twist. Samuel Hayden gets practically no role, even in an “I told you so” way. Him getting his comeuppance was a major narrative buildup that just gets dropped.

Explaining how Doomguy gets his powers doesn’t really add anything to the plot, because the benefactor is given no characterization and it just serves to demystify Doomguy’s badass-ness. Having the researcher basically get off on how big and strong doomguy is during the super gore nest level is honestly really creepy and hamhanded. I don’t know what they were thinking with that.

The core dynamic of 2016 was that other characters gave a shit about stuff and Doomguy was fed up with their shit. Hayden being a reluctant ally that wanted you to give a shit about his cause was an interesting character dynamic. Khan Makyr is all, “how dare you defy our ancient traditions!” but she doesn’t have a sympathic motivation (like Hayden’s save the earth from the energy crisis), so the dynamic falls flat. They try to recapture some of it by having other characters mention “she needs to continue using argent energy to save her world” but she never says it herself, and there’s never any other member of her race represented, except for in a vat, so it’s hard to imagine that her world is dying, or their use of argent energy actually benefits anyone. The idea of sacrificing other people for her own benefit is explicitly evil-coded, as opposed to Hayden just using the argent energy for the good of Earth and never intending to kill anyone (even if the “twist” in this game reveals he was profiting off the suffering of dead people).

So how could they have done it better? Hayden’s face-heel turn at the end of the last game was great, and him getting bit in the ass by using demons and reluctantly helping you is also a great dynamic. However it requires another villain to really work, so introducing new villains was inevitable. There could have been a 3rd party who helps you out to stop Hayden, but then betrays you, but that wouldn’t really fit the concept of “don’t use demons, stupid” and it’s kind of a retread of the last game. The most obvious 3rd party villain to fuck Hayden up would be someone from Hell, like the Icon of Sin itself, or some lord of hell (there’s an offhand reference to how the Makyrs made a deal with hell’s lords to do their argent energy thing in the first place, they could have pulled this off easily), because otherwise hell comes across as a mindless force of nature, which doesn’t give Doomguy a chance to tell serious plots to fuck off. Ideally the villain is someone who Doomguy might be inclined to help that reasonably needs Doomguy’s help, so he can tell them to fuck off because he cares more about killing the demons, but I can’t really think of a way to make that work.

Getting some time to introduce the new villain and build their character, maybe give you an attachment to them, would be cool. Assuming it’s the Icon of Sin, maybe they assume control of the argent energy stations on earth that Hayden set up to unleash hell on earth, you get some time to get introduced to them as they monologue to you about how your quest was pointless, maybe introduce a prophecy or some bullshit reason that what they do is important, the more reasonable sounding and tied into the plot up to now it is without feeling contrived, the better, and Doomguy gives him the finger.

Another angle is maybe Marauder was part of Doomguy’s old crew and he wants Doomguy to join him as a demon and has some reason Doomguy might actually want to do it. Maybe humankind betrayed him and were the ones who originally imprisoned him in hell in fear of his power.

I can see a Devilman sort of story working out, where it’s Earth’s hour of judgment and angels (not makyrs, actual heavenly angels) are there with popcorn, being all “don’t interfere, they brought this on themselves. We’ll see who begs forgiveness.” And Doomguy is like “fuck you, I’m killing every last demon.” This would be compatible with the Marauder baddie angle too.

Core plot beats: Hayden needs comeuppance, Doomguy needs an excuse to flip off anyone giving him a reason to not kill all the demons, the reason should ideally be reasonable enough that it might be convincing to players if they weren’t playing Doomguy.

I’m hoping to have a Doom Eternal guest review here written by another member of my discord soon, but there are edits I requested on that review that are still pending, and they’re held up with schoolwork and general life business, so it may take a bit. If you’d like to write a guest article or review, please drop me a tweet @Evilagram, or contact me on Discord, Evilagram#8383. I like working directly with contributors to give them feedback and edits that help them match the style of my blog better, which can also give them an insight into my thought process and the level of rigor I try to put into my analysis. It’s on a volunteer basis, you still own your writing. I only ask for license to republish it, not to own your words, and I will remove any article you write at your request.

3 thoughts on “A Critique of Doom Eternal’s Story”